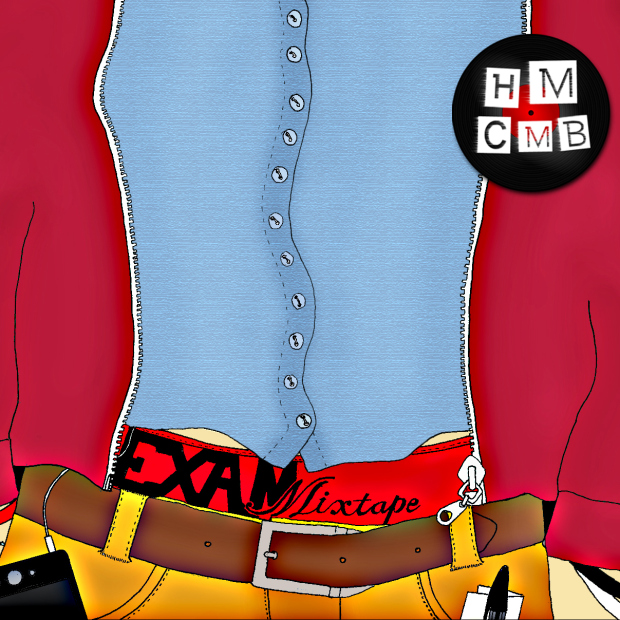 It’s been kept fairly under wraps, reason for that of course being to make it all the more of a surprise and of course having nothing to do with our tardiness… Without further ado, we are proud to present HMCMB’s Exam Mixtape!

Unforunately we 3 HMCMB musketeers now find ourselves very much in the midst of exam season. With the spectre of said exams looming over our shoulder it’s more than likely, sadly, that the frequency of posts will decrease. That is of course a fairly lamentable situation and as such we’d like to lessen the blow for you, our loyal readers. To that end we’ve spent the last month or so tirelessly composing our “Exam Mixtape”. Debates have been raging at the HMCMB offices (aka bedrooms) and via the indespensible medium of texts. We do now believe however that we’ve selected 16 (42 for those also facing math exams) of the finest, new(ish) hip-hop tracks for your listening pleasure and, for those in a similar position to us, “revision” accompaniment!

Writing about these tracks is likely to lead into somewhat of a paradox. On the one hand you could say they are very similar. Almost all have cracking hooks, be they borrowed, original or a combination of the two, exceptional flow, tight production and some truly inspired lyricism (more on that later). Yet at the same time they are all so different, obviously vocal tone is unique to each track but so also is the choice of beats, be they dense or soft, sharp or smooth, not to mention the pairing of flow to said beats, rapping on the beat or off it, matching tempo or trying to race ahead of it. It’s these subtle differences that give each track its own personality and equate to it being more than the sum of its parts.

In an effort to avoid becoming trapped in aforementioned quagmire of paradoxes we’ve decided not to offer in depth analysis of each track, as unusual as that may be! Instead we’ve opted to include our favourite lyric from each track beside it’s stream below. It is after all so often lyricism, that for us at least, sets hip-hop apart. You only need look at the lines we didn’t select to realise just how sharp/insightful these artists are at times, e-dubble’s rant/declaration of intent in “Be A King” is truly sobering and Gambino’s “Freaks N Geeks” is so littered with genius that we can’t do it justice, (Rap Genius does though). So please do enjoy the lines below but also have a keen listen out for the gems littered throughout the mixtape. Download it BELOW off of Mediafire, then once it’s downloaded, double click the file to unzip and enjoy!

‘Take a plane to Japan and drink Sake with the Mafia,
fly to Libya for some Bacardi with Gadaffi-ya’

‘Cause the weatherman always lying,
he sounds like my politician’

By Your Side  –  Absolute Pursuit

‘We’re only teens now but let’s shoot for the stars, I’ve been wishin’ on them,
just to keep us who we are, every one I see’s a dream, every one of them is ours’

‘I treat my clothes like my groceries,
I wouldn’t buy it if it wasn’t fresh’

‘Leaving them impressed and so astonished,
the white boy rapper who does not love college’

Down With The Trumpets  –  Rizzle Kicks

‘Cause I’ma G, no I’m not, who’m I kidding,
I aint flyer than a pigeon, I’m softer than little kittens’

‘Smart girls like to show it off, head game off Hermione Granger,
I’m basically sayin’ she a know-it-all’

Take Me Away  –  Fortune Family

‘I’m not Drake man, I’m not telling you to thank me,
in fact I’d rather you didn’t know who I am and pull a Banksy’

‘Yeah you touch paper but you don’t touch money,
all these carats in my jewellery I got beef with Bugs Bunny’

‘They say the flow goes so out of this world will he beam him?
Up Up to Scotty he can’t keep me down…bullimic.’

‘Come share your problems with me labels,
in sixth months we all don’t exist’

‘Its like we’re living in the Tron game,
lines are all blurred ’cause we’re sippin’ on the Bombay’

You downloaded that Mixtape yet?!

Tom, Pete and Will